Are you worried that a machine learning model may be a stolen copy of your ML model? We answer this question with a new technique called dataset inference, introduced in our paper at ICLR 2021.

Our work starts by making the pessimistic but realistic observation that we cannot prevent model stealing. However, this does not mean we cannot detect when models are stolen. No matter how an adversary attempts to steal, their stolen model copy will contain information that originated from our dataset. Our insight is that most of the valuable intellectual property of the model comes from its training data. Our approach, dataset inference, thus attempts to distinguish a model’s behavior on points from its training set versus from unseen data. This distinction is measured on suspected stolen copies of our model to determine whether they contain knowledge exclusive to our data collection.

Here is a talk about our work which complements the rest of this blog post.

Why will anyone steal my ML model?

Training machine learning models from scratch is becoming increasingly expensive. This can be attributed to various factors that are involved in the training of a high-performing ML model — the high computation cost, the private dataset required to obtain high task accuracy, and intellectual contributions such as algorithmic or architectural novelty.

How can an adversary steal my model?

An adversary may gain direct access to your knowledge and attempt to steal your model inconspicuously. This may happen when they gain (a) complete access to your private training data or (b) deployed model. This may happen due to insider access [1], or if you released your model (or data) for academic purposes (forbidding commercial use). For instance, if OpenAI were to release GPT-3 to the community, how could they ensure that no one later misuses it for commercial purposes?

A more indirect scenario is (c) model extraction. Here, a victim provides a machine learning service over the web, and an adversary repeatedly queries it on various data points. The answers to these queries allow the adversary to label a dataset subsequently used to train a copy of the model (for example, through distillation [2]).

Why is it impossible to prevent model stealing?

In scenarios of complete data access and model access, the adversary has all the ingredients required to train an alternate ML model: (a) either using the complete dataset or (b) via data-free knowledge distillation [3] once the entire model is available. It follows that model stealing is impossible to prevent if such access is unavailable.

The case of model extraction (c) is slightly more involved. To be of any commercial use (e.g., Machine Learning as a Service), a model owner must allow query access to legitimate users. However, adversaries may spoof adversarial queries to extract the model. They may also distribute their queries over multiple IP addresses to avoid detection. As a result, victims can not prevent such extraction attacks.

What is Dataset Inference?

Dataset Inference is a method to detect if a suspect model has been trained on a private dataset, or more generally, the knowledge contained within it. It builds on the observation that a model behaves differently when presented with training versus unseen (test) data.

More concretely, during training, the optimizer pushes the boundaries of incorrect class labels further away from points in the train set. This impacts model weights, and in turn, its predictions. However, the points in the unseen (test) set do not get a chance to modify model weights.

We illustrate this distinction below. On the left-hand diagram, the training point x (assigned label A) is further away from the closest points in classes B, C, and D than the test point x is on the right-hand diagram. We use prediction margin to denote the distance to incorrect classes, which we note, is also a measure of uncertainty of the model’s decisions.

If we repeat this experiment several times, we can simulate the expected prediction margin for points within the training or test (unseen) distribution. While the prediction margin for individual data points may have a very high variance, as an expectation over multiple samples drawn from the two distributions, we will observe a difference in the prediction margin (as a result of the optimization process). In our paper, we theoretically prove this result for the case of linear models. This allows us to test whether a model contains knowledge derived from the training set, as we explain next.

How do I resolve model ownership? 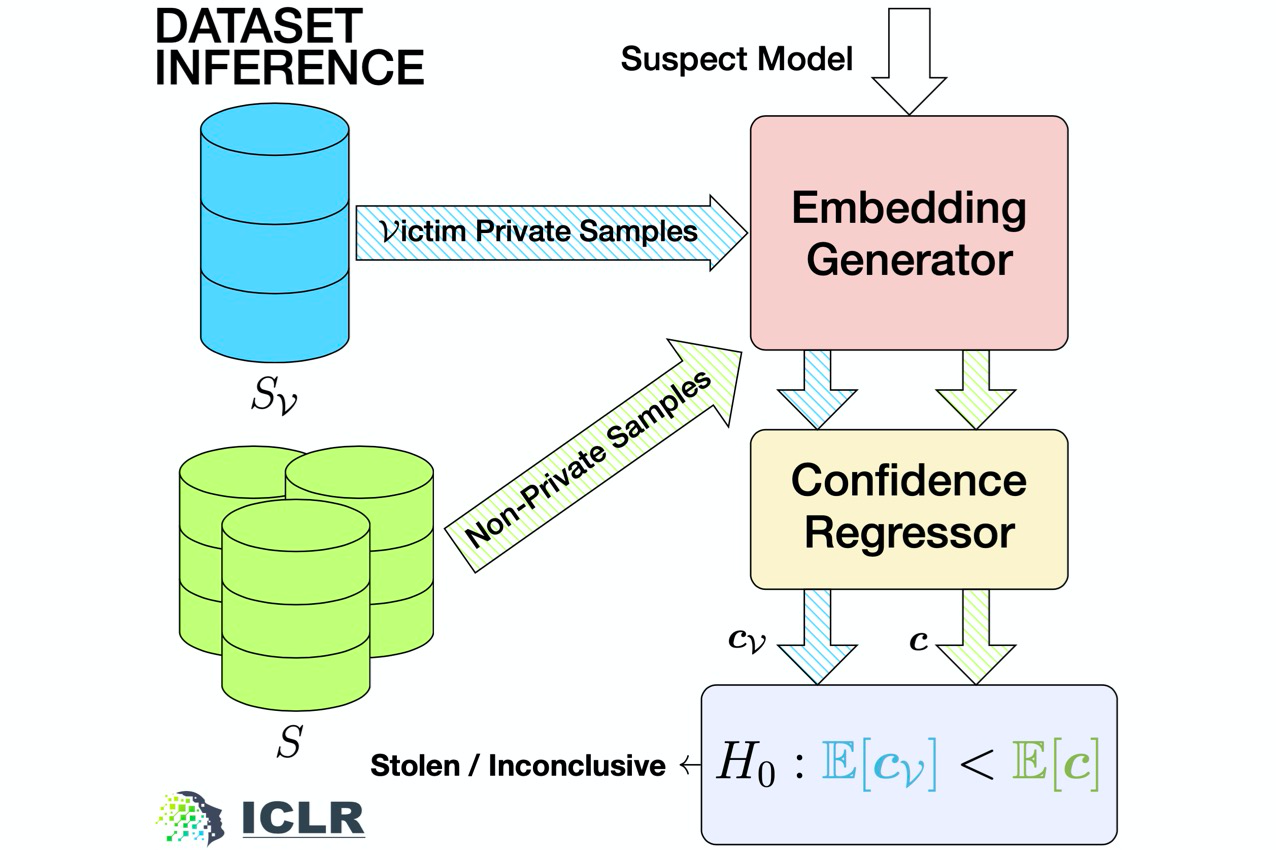 Given access to a suspect ML model, dataset inference takes the following 4-step process to check whether the suspect is stolen:

Dataset inference shows promising results across different ML benchmarks such as CIFAR10, SVHN, CIFAR100, and Imagenet. We find that we can resolve model ownership by testing against a significance level of 1%, with fewer than 60 private samples of our dataset. We test the efficacy of our detection framework against 6 different attack strategies, including new adaptive attacks that are specifically designed to fool dataset inference. We find that dataset inference is robust to such attacks and performs well both in the white- and black-box settings.

You can find more information in our main paper. Code for reproducing all our experiments is available in our GitHub repository.